Tenzou Crossunite (点蔵・クロスユナイト, Tenzō kurosuyunaito) is student of Musashi Ariadust Academy, the 1st Special Agent of the Chancellor Board in charge of Intelligence (諜報, Chōhō). A ninja who always covers his face with his hat and also a errand boy who would readily do anything to help others.

Highly talented, excelling in Ninjutsu and Espionage. Though very nice in character, he is also quite the pervert, openly declaring his love for blonde-haired, big-breasted women.

A slender blond teenager, Tenzou wears a modified Far East male uniform with a smaller opened short-sleeved jacked, baggy-kneed tobi pants to increase mobility, a long peaked cap, and a red scarf, giving him the looks of a highly non-archetypical ninja. He also has attached an armband that reads "First Special Agent: Tenzou Crossunite", giving his position in the Chancellor's Board.

Tenzou's face is always covered by the scarf, thus his cap with animated eyes becomes the means to reveal his expressions, so while no emotions can be seen on his face, the hat express exactly what he feels. Under his clothes, his body is full of scars.

A nice guy all-around, Tenzou takes the old-fashioned formal speech pattern very seriously (even if not to Honda Futayo extents) introducing -de gozaru (an archaic form of desu) in almost every sentece he says and refering to himself as jibun (impersonal and "selfless devotion to duty" style of referring to oneself).

Even being a good man considerate and kind to women, he's unable to score a girlfriend (until volume 2). It’s hard to put into words, but as Toori explained in a bulletted list, wearing some ninja outfit all the time, having unreasonably high standards (only big-breasted blondes) and sometimes emanating the smell of a dog from his clothes could have something to do with that.

Like Mary he's an altruistic, servile and hard-working individual, that being reason why he's always acting as a errand boy and jack-of-all-trades to the inhabitants of Musashi. When asked if that kind of life is tough, Tenzou would say that doing that suits him since even if it's a path of hardship, ninjas are supposed to carry their duties while hiding their feelings. If he could follow and help those who shake the history in their shadows, merely the honor of being part of history that way is good enough for him.

Class 3-Plum began the day assembled outside of Musashi Ariadust Academy, preparing for PE class. The objective of this class was to land a blow on Oriotorai-sensei before she makes it to the house of her former landlord on another part of Musashi, the price, five justified absences. Tenzou and Ulquiaga make sure she wants them to make a hit or just graze her, and then asks if there’s anywhere they’d get points deducted for touching or groping so Oriotorai threatens them at that commentary. During the class, Tenzou, Ulquiaga and Noriki ally themselves to attack the teacher, with Tenzou charging forward straight towards her, Ulquiaga from the sky and with she blocking the double offense, Noriki getting the hit. This approach fails because Oriotorai releases her sword towards Noriki’s face so he is forced to punch it away while the teacher just escapes from the area. At the end, no one was able to hit the teacher minus Aoi Toori, who was just after skipping class walks up and grope her boobs.

That night, the class reunited in "spirit-hunting" party to celebrate the night before Toori's most important day by playing a game of tag with some of the people the chancellor asked to play as ghosts. However, their celebration was interrupted when they discover the countdown before the destruction of Mikawa, planned by none other by its leader, Lord Matsudaira Motonobu.

Lord Matsudaira's reveals that P-01s is his departed daughter Horizon Ariadust and one of nine powerful weapons called the Logismoi Óplo, the Armaments of Deadly Sins. As Mikawa explode initiating Motonobu's Genesis Plan, the lives of all Class 3-Plum changed forever.

The day after the meltdown, Tenzou went to class with the rest of his classmates to discuss the situation. Horizon inherited rule over Mikawa, she now also represents the Far East, including Musashi but that will end once she commits suicide. Nate, Naomasa, Masazumi, Miriam and Azuma were absent that day and Toori seemed to be highly distressed. After being informed by Shirojiro Bertoni of how they won't be able to replenish supplies if they oppose the Testament Union right now without Honda Masazumi siding with them, professor Oriotorai walks in and says that today they have to write an essays about “What I Want to Do.” After that, she tunes an exchange on live transmission between Tres España’s, with Tachibana Gin and the Mikawa, with Honda Futayo. Gin tells tries to give back the Slicing Dragonfly to Futayo, but she realizes that as this is being transmitted to the world, she had to do something so the Far East will not give up. She charges to take back the lance on her own, but Tachibana Muneshige stops her.

Everyone began to write, and after the emotional Suzu essay begging to save Horizon, Toori stands up and says that he will do it, as he only was recharging his manliness gauge reading a ero-book about silver-haired women. After that, the class (representing Musashi) had to prove their point to Masazumi, Nate, and Naomasa (representing the Testament Union) to test the class strength and if they are strong enough to do as they wish. First, Shirojiro wins against Naomasa Jizuri Suzaku. Second, Nate wins against Suzu (even if only because she showed her knight code after catching Suzu as she trips). Third, Toori debates against Masazumi, but he deceive her to take the "save Horizon" position on it, so she shows the world and Pope Innocentius the reasons the Far East have to save Horizon. As it ends in tie, Futayo have to fight someone to break the tie, and Tenzou says he should fight, but Toori stops him saying that he already lost in a battle of character (as Futayo takes the samurai speech even further than him). At the end, Kimi is the one to fight Futayo and ends as the victor.

During Horizon rescue campaign, Tenzou went with Aoi Toori, Noriki, Adele Balfette, Persona and the Far East armies in first line of combat. Even when the Tres España "Tercio" forces use a pincer attack, Tenzou charged with the main forces to the ship where Horizon is, but they are intercepted by K.P.A. Italia. The Pope uses the Armament of Deadly Sins, Staseis Pornea, rendering their weapons and attacks useless. Toori finally sanctions his high-level contract, allowing him to freely use 1/4 of Musashi’s ether reserves, meaning that his comrades can effectively use spells for eternity during it's effect. With that and a Noriki and Masazumi diversion, Toori is able to confess and save Horizon.

That night partying with everyone outside the Blue Thunder, a drunk Tenzou lectures with Ulquiaga and Ohiroshiki about eroge, claiming that in the next one he will be the one playing the busty blonde girls routes.

Tenzou Crossunite is a Ninja Forcer · Proximity Ninjutsu User (近接忍術師 · ニンジャフォーサー, Kinsetsu ninjutsu-shi · Ninjafōsā) and his close-combat style consists in the usage of diverse ninja skills and objects just as kunais, short swords, poisoned darts or martial arts like ninjutsu in a duel, with faint attacks as his speciality. As 1st Special Agent, Tenzou is described as a very fast battle-type proficient at close combat, armed fight tactics, perspicacity and secret information. He exceeds amongst other Musashi ninjas enough to be considered top class, but even so he's somewhat a target for jokes by his own classmates, being considered as Class 3-Plum gofer. Thanks to his ninjutsu skills, he's able to walk walls vertically and specialize in escort missions. Among his classmates, he's with Urquiaga and Nate (and later Futayo) the only ones undertaking serious combat training and experience exterminating youkais or unusual phenomena.

Musashi's First Special Agent usually serves in feint capacity during battles, and even at England’s London Tower Assault he does not engage in any direct combat, but among Class 3-Plum he's also a very capable fighter only surpassed by Futayo Honda. During said assault, Tenzou was able to surpass Walter Raleigh position by using his own remarkable speed and clever tactics. He first evades Walter's horizontal slash trying to feint him, and when the TRUMP passes one of his gravity knives through inside his kimono sleeve to grab the knive with his left hand while he unsheathes another one with his right hand and duplicate to attack Tenzou, the ninja cancels this move by using Milton to distract one of the copies. Musahi's 1st Special Agent avoids the other Walter by grappling the arm with the knife and slipping through Walter legs. Walter two last attacks ends in failure when Tenzou throws his jacket into Walter face, evading them and taking flight to the inside of the Tower of London.

Facial expressions.
Add a photo to this gallery

Tenzou Crossunite's character design by Minoru Kawakami.
Add a photo to this gallery 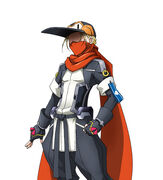 Tenzou Crossunite's character sprite in the Kyoukai Senjou no Horizon PORTABLE PSP game.
Add a photo to this gallery

Retrieved from "https://genesis-horizon.fandom.com/wiki/Tenzou_Crossunite?oldid=8168"
Community content is available under CC-BY-SA unless otherwise noted.