P-01s (ピーゼロワンエス, Pīzerowan'esu) is a female automaton who works as the poster girl of the Blue Thunder food shop located in the flying ship Musashi. Originally Lord Motonobu Matsudaira's daughter and Toori Aoi's childhood friend Horizon Ariadust (ホライゾン・アリアダスト, Horaizon ariadasuto), an accident abruptly took her life at a young age and she was reborn as an automaton whose true identity was kept a secret until the final moments of Mikawa before its destruction.

After being rescued by the combined efforts of Toori Aoi and Class 3-Plum of Musashi Ariadust Academy, she is enrolled into the said academy and now leads alongside Toori as Musashi's first viceroys.

P-01s has long silver hair and blue eyes, with a hairstyle similar to that of Horizon Ariadust. As an automaton, her body is mostly composed of mechanical parts that are covered using a substance that replicates the look and feel of human skin. However, there are some parts like the shoulders, arms and fingers, which have black-colored skin; these parts house the more sensitive machinery. P-01s also has heat radiators and various sensors on each side of her head; these appear as her hair accessories.

P-01s wears a dress that resembles a cross between an apron and a sweater, with loose sleeves and a frilly bodice. Inside, her inner suit has an upper garment that is designed to look like a tube top.

As an automaton, P-01s is unable to portray emotions by using facial expressions and she demonstrates perfect logical thinking. Regardless, she is a kind girl who loves doing what she likes. She also cares for Toori, although she tends to treat him rudely because her logical thinking dictates that she needs to feel annoyed at Toori's antics towards her. Her 'punishments' towards him include frequent punches to his crotch, as well as chiding. Over time, as Soul Activation causes her stored emotions within the Mortal Sin Armaments to return to her, P-01s becomes able to show basic emotions, with crying as her first display.

The habits she developed during her stay in the Musashi aside from serving Blue Thunder's customers includes watering the brown algae that roam the sewers of the flying ship, cleaning the gravestones in the nearby Okutama Cemetery, and singing the Song of Passage.

P-01s was was secretly brought to the Musashi from Mikawa in the year 1647 TE. During this period, she stumbles upon the Blue Thunder shop, where she was taken in by its shopkeeper. She soon becomes the store's poster girl.

At the days following her employment in the Blue Thunder shop, Toori Aoi begins to visit the shop with increasing frequency. She treats Toori quite harshly, although Toori does not take heed of this; unknown to her, she is treated by Toori as how he would treat his long-departed childhood friend Horizon Ariadust.

During the resupplying of the Musashi in Mikawa, P-01s continues her work until the shop closes for the day. Afterwards, she prepares to watch the "fireworks" Lord Motonobu Matsudaira prepared. To the shock of many, the "fireworks" is in fact a meltdown sequence that would decimate the Shin-Nagoya Castle and most of the structures surrounding it.

The forces of Tres España, deployed by the Testament Union to act as security for Pope-President Innocentius of K.P.A. Italia, rush in to stop the meltdown from progressing. Meanwhile, Lord Motonobu announces the truths he kept hidden from the rest of the world. He reveals that P-01s was his daughter Horizon Ariadust, reborn as an automaton after her death in a carriage accident. Also, he stated that P-01s is the ninth Mortal Sin Armament called Ólos Phthonos, an operating system that binds the other eight together.

Lord Matsudaira was instantly killed after the meltdown sequence destroyed much of Mikawa. Because of this, the Testament Union orders the capture of P-01s, who as daughter of Lord Matsudaira now holds the position of Mikawa's leader. She is arrested for the crimes her father had committed, and was sentenced to commit suicide twelve hours after, on April 21, 1648 TE at 6:00 PM.

P-01s is taken to the Testament Union's Inquisition Warship, where she is given a prisoner's white robes to wear and an attendant to constantly monitor her actions inside. P-01s' request to change into her usual clothing was granted, although she did not use the privilege to have herself reassigned to another cell. She is later moved to a specially-made cell, with three sides made up of Disintegration Walls, specially-made contraptions which can serve as a mental torture to anyone who would make contact with them. Surprisingly, her detention was not as harsh as expected, as she was able to read books inside her specially-made cell.

Meanwhile, Toori Aoi and students from Musashi Ariadust Academy devise a plan to rescue P-01s from her death sentence. After an uphill battle against Testament Union's forces, Toori manages to reach P-01s. As an automaton, P-01s tries to reason her way into forcing Toori to give up rescuing her, but Toori's cunning wit was able to force out P-01s' more honest side using parallel standpoint. As P-01s is a automated doll’s, her logical imperatives reigned supreme, making her to refuse everything Toori said to not put the Far East at a disadvantage because of her. So, as Horizon ends up saying that she doesn’t want to hear his responses, Toori says as that makes them inversely parallel, he wants to hear her response from a parallel standpoint. Using this, he makes Horizon say all what he said earlier, that she's not meaningless, has emotions and a human soul so she wants to live. At the end, Horizon says that she knows they can reach an agreement and Toori ask where is the place where they who are parallel could possibly intersect. She says they can meet where all parallel lines meet, where conflicting ideals are reconciled, and that is "above the horizon".

In an unexpected accident involving Toori's hands touching P-01's breast, P-01s joins Toori in the zone created by the Disintegration Wall, and they try to survive the deadly effects of the unusual contraption by denying the memory of the moment of her death. Toori's quick thinking manages to get them out of the Disintegration Wall, and the two reunite for the first time.

Horizon accepts the recommendation letter to enroll in Musashi Ariadust Academy carried by Toori. As Innocentius run away, they are unable to recover Staseis Pornea, but Horizon gets Lype Katarripsi from a victorious Honda Futayo over Tachibana Muneshige. Horizon and Toori use Lype Katarripsi and as the crying girl recover her feeling of "anguish" through Soul Activation, the Mortal Sin Armament Hyper-Drive reaches a second level of power and destroys the Eikomaru ship pursuing them. Horizon asks if emotions are supposed to be this painful and Toori tells her to cry as he can’t do it anymore. Finally, they kiss.

During the party held at night, Toori and Horizon were sleeping, leaning against one another inside the Blue Thunder. The day after that, as always Horizon breakfast did not taste very good.

Although lacking the skills to actively fight in battle as a combatant, P-01s is designed to be able to use all of the eight remaining Mortal Sin Armaments at the same time. She eventually becomes a powerful unit in combat as she acquires the Mortal Sin Armament Lypē Katathlipsē after Muneshige Tachibana's defeat and Olos Phthonos after Thomas Shakesphere's defeat. P-01s also has the ability to go into a standby mode to install additional programs into herself, such as creating a compressed dimension near her body for storage of both Mortal Sin Armaments and her belongings. 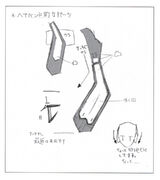 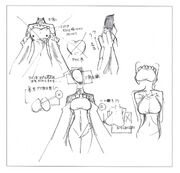 Horizon ariadust's character design by Minoru Kawakami.
Add a photo to this gallery 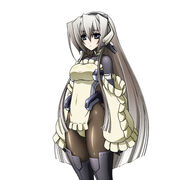 Horizon Ariadust's character sprite in the Kyoukai Senjou no Horizon PORTABLE PSP game.
Add a photo to this gallery

Retrieved from "https://genesis-horizon.fandom.com/wiki/P-01s?oldid=8288"
Community content is available under CC-BY-SA unless otherwise noted.