Certain events in her life almost caused a radical change in her physical appearance, and she faces life trying to fulfill her father's wish and knowing the truth behind Remorse Way.

Masazumi is a young girl with dark brown eyes, long black hair and a slim physique. One distinct trait in Masazumi's appearance is her flat chest, which was the product of undergoing a mastectomy in preparation for her gender reassignment. However, when she was not chosen as successor to the family name further scheduled surgeries were then halted.

Masazumi's uniform is also quite unique as well, consisting of the school's uniform for males modified so that the upper garment only reaches down to her midriff. She later wears the girls' tightsuit, replacing the slacks she often wears.

Because of the pressures she receives from her father, she developed a serious attitude, focusing more on work and following rules than her personal enjoyment.

The shopkeeper of Blue Thunder once mentioned that she and Toori did not get along in the past, although she seems to show concern for him recently.

Because of the numerous efforts that she makes in her everyday life of vice-president of the Academy and her habits to make cross her work before everything else, she tends to easily faint every time she is hungry.

Masazumi was born in Mikawa with her father Masanobu and her mother. She inherited the name of Masazumi Honda, and as the child of Masanobu Honda, she was considered to inherit the duties of the leader of one of the two retainer families of the Matsudaira clan after her father becomes ineligible to take over the position. However, since Masazumi is male according to history, she was planned to undergo several procedures which would reassign her gender.

After a young Masazumi underwent a surgery that removed her breasts, the procedures were interrupted after Lord Motonobu Matsudaira of Mikawa ordered the exile of most of his subjects, replacing them with automatons. The family later moved to the Musashi, and years after that, her mother suddenly disappeared and was later reported as spirited away. Masazumi later took up the job of teaching elementary pupils years after her arrival in the Musashi.

In Mikawa, she studied politics under Motonobu Matsudaira and was friends with Futayo Honda. Their fathers are cousins, making them second cousins.

After a hectic day as an elementary school teacher, a starving Masazumi is found at the steps of Blue Thunder by P-01s. The automaton takes her in and the shop's owner gives her some snacks to eat. Masazumi reveals that she is assigned to accompany Musashi Ariadust Academy President Tadatsugu Sakai and in response, the shopowner tells about the said school's Chancellor Toori Aoi and his frequent visits to P-01s. The shopowner discovers that Masazumi knows little about Toori, so she asks her to visit Remorse Way to enlighten herself.

Masazumi later visits the Honda family cenotaph in the Okutama Cemetery for some cleaning, and she meets P-01s for the second time that day. P-01s' song made Masazumi reminisce painful memories from her mother who suddenly disappeared, and she soon tells the automaton about her past.

The Musashi arrives at Mikawa shortly, and Masazumi escorts Musashi Ariadust Academy President Tadatsugu Sakai on his trip to Mikawa, quickly heading back afterwards. During this time, she considers investigating about Remorse Way to find out about Toori and the important event that happened ten years ago.

In an unexpected twist, Masazumi receives a box which is supposed to contain an eroge that is supposed to lure Toori into walking past Remorse Way — a feat that he has been struggling to do for a long time. On her way there, she stumbles upon her father with an associate on a carriage, and she listens to the story behind Remorse Way from them. As the two head off to their destination, however, she finds herself with more questions than answers.

While Musashi Ariadust Academy is shaken by Toori's devious ghost hunting party, Masazumi is among the many spectators expecting the "fireworks" in Mikawa. Things become alarming for her, however, when Lord Motonobu Matsudaira announces P-01s' true identity as his long-departed daughter Horizon Ariadust and the hidden ninth Mortal Sin Armament. Masazumi decides to take her to the Blue Thunder for answers, but the quick actions of the forces of K.P.A. Italia, led by Pope-President Innocentius who was on a special trip to Mikawa that day, forces her to make harsh decisions: to leave P-01s to K.P.A. Italia and subdue Toori Aoi before any further violence may erupt.

The next day, only she retains her political power following the announcement of P-01s' execution.

Masazumi's intact position as Student Council Vice-President soon becomes a prime focus of Class 3-Plum, who now needs her position to push through the plan to rescue P-01s from execution. Through some clever thinking in 3-Plum's part, she is forced to appear (with Nate Mitotsudaira and Naomasa accompanying her) in front of Musashi Ariadust Academy as part of the class' special meeting.

With a conflict between students that needs to be resolved, teachers Makiko Oriotorai and Mitsuki Sanyou organize a student contention to decide the school's next move regarding P-01s' execution. While Naomasa (who comes in behalf of the Musashi Engineering Club) and Nate (who comes as the nobility's representative) fight Class 3-Plum Shirojiro Bertoni and Suzu Mukai respectively, which results in a win and a loss for Toori's side, Masazumi takes on Toori himself in debate.

To her shock, Toori takes up the side which leaves behind P-01s to be executed, so Masazumi is forced to defend the rescue mission. Masazumi explains Toori the reasons to save Horizon. It would secure Musashi’s sovereign powers, as there are three attributes required for a country to be sovereign, it must show independence, someone must reign over the land and the people, the ability to make decisions. Masazumi says that currently, the Far East’s sovereign powers are being violated, but if they save Horizon then they’ll stand to the other countries. But as the Testament Union wasn’t likely to accept that, they would go to war for it.

Toori then ask questions coming from Konishi, the merchant and Honda Masanobu, Masazumi’s father. The former asks He says that even if they save Horizon, they could lose people to the war, and Masazumi says that there could be a death toll even if they avoid a war due to poverty. The latter asks for a valid reason for opposing the Testament Union aside from the issue of sovereign powers, and goes on to ask if the Testament Union is evil for ordering her suicide. Masazumi begins to realy in a sheet, realizing that if she says what she wrote there her future as a politician will end. Not sure of her answers, she begins to tear her paper but Toori asks her what is the point if she doesn’t give the answer she wants. Adele bring the brown algae, and they ask Masazumi to save Horizon, as politicians help people. A now confident Masazumi stands discarding her paper and saying that there is no reason for Horizon to take responsibility of Mikawa's Incident, because when Lord Motonobu’s died Horizon wasn’t his legal heir. To add to that, since P-01s does not remember her past as Horizon Ariadust, she is no related to the meltdown. She calls it a monstrous system and that if they attach Mikawa to Musashi, no one would be blamed. To her, the Testament Union is just abusing the Testament.

Pope Innocentius makes his move claiming that Masazumi is just using fallacies. As Masazumi steps to debate aggainst him, she vows Toori that she’ll pave a way to Horizon. Innocentius arguments that there are multiple ways to interpret the Testament, and that Horizon’s would be a martyr for the Testament’s declared history. The Pope President is just reusing old arguments, something he can do forever, whereas Masazumi has to think about and thus grow weary and eventually give up. As Innocentius is using scorched earth tactics Masazumi use parallel views, saying that their values are incompatible with Testament Union’s ones. Innocentius disagrees so Masazumi answers that she is glad that it’s possible that they can reach an understanding, ordering Shirojiro to gather all of Musashi’s finances under one management group so they can support their foreign settlements that are suffering because of the asset freeze and Asama to request an informal succession reevaluation about Horizon Ariadust. So, if the Testament Union freezes their settlement’s assets, Musashi will finance them. If the Testament Union declared Horizon their ruler through informal succession, they’ll protest and intercede. and if the Testament Union tries to force Horizon to commit suicide, they will invite her to the academy and protect her as one of Musashi’s students.

The Pope counters claiming that Lord Motonobu was trying to conquer the world via his daughter, as she's a master OS to control the other Armaments of Mortal Sin, so even if the Testament Union don't wants to go to war, if they still want to save Horizon they will have to do so. Then he begins to try to destroy Masazumi public image attacking her and her father in their failure to become name inheritors and her gender reassignment surgery. He accuses her of lying, and being drunk with the desire to lead, but Toori steps up (surprised that she's really a girl, showing her panties and groping her little breasts) confronting Innocentius, praising Masazumi for finding the answers he could not, proclaiming his full support in her. Toori asks Masazumi to tell them all what’s in it for other countries if they save Horizon, and Masazumi reacts not only a human life will be saved and history recreation can return to normal with Mikawa's annexion, also that they will gather the Armaments of Deadly Sins to prevent the apocalypse, while seeking no compensation. The Armaments are made from Horizon’s stolen emotions, so they belong to her. They will want other country’s help against the apocalypse, but if they want hostilities, Far East will counterattack. Innocentius stops the negotations and orders Galileo (who teleports outside the Academy) to get them, but Futayo arrives to stop him.

She also participates into the assault to rescue Horizon hours later, staying out of direct combat all the time. Thanks to her diversion (challenging Innocentius into a duel she was never thinking to do) Toori is able to get to Horizon and ultimately save her. Once they retreat, Masazumi says that since Horizon accepted enrollment into the academy, she is under their protection and goes on to say that she trusts they can reconcile all conflicts at the Peace of Westphalia.

During the night party, Masazumi explains Neito that that they’ll go west, to England, looking for some connections there while Musashi undergoes repairs. That night, she shockingly discovers that the Blue Thunder shopkeeper is Toori and Kimi's mom. 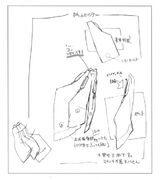 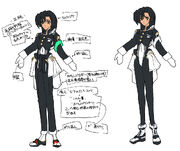 Masazumi Honda's character design by Minoru Kawakami.
Add a photo to this gallery
Retrieved from "https://genesis-horizon.fandom.com/wiki/Masazumi_Honda?oldid=8377"
Community content is available under CC-BY-SA unless otherwise noted.